On September 5, the celebration of Portsmouth Peace Treaty Day and NH citizen diplomacy takes place in Market Square, starting at 3:30 pm. The Mayor of Portsmouth reads the Governor’s Proclamation and letters are expected from New Hampshire Senators Hassan and Shaheen, Representative Chris Pappas and Representative Ann McLane Kuster, whose great grandfather John McLane was Governor of New Hampshire and host to the 1905 peace conference.

At 3:47 pm, Portsmouth Naval Shipyard sounds a memorial salute at the exact moment the Treaty was signed in 1905 and, on that cue, the bells of Portsmouth ring. The public is welcome to participate in the bellringing ceremony at the Treaty historic marker outside the Piscataqua Savings Bank and Judge Calvin Page memorial (15 Pleasant Street).

Participating in the bell-ringing are:

While a 1905 postcard suggests that North Church had a bell cast by Paul Revere, possibly confusing Portsmouth’s with Old North Church in Boston, a 1732 Revere bell does hang in the steeple of St. John’s Church, on Chapel Street in Portsmouth. St. John’s participates in the annual Portsmouth Peace Treaty Day bell-ringing commemoration on September 5th.

In 1904 Americans began a charity to support Japanese widows and orphans of the war. Its chief officer was Portsmouth native Edward Warren Clark, a retired Episcopalian priest and pastor’s son whose brother had been pastor of St. John’s in Portsmouth. Rev. Clark had met the young Komura and Takahira in 1871 when he taught western science at Kai Sei Gakko in Tokyo. Rev. Clark, now an adult and retired from the clergy, had returned to his native city in 1904 where he spoke at North Parish Congregational Church using glass slides about Japan and the Asian crisis to raise charitable funds for the support of widows and orphans created by the war. The North Church bell rings each year for Portsmouth Peace Treaty Day.

The bell (below) in Christ Episcopal Church (1035 Lafayette Road) in Portsmouth was rescued from the old Christ Church in downtown Portsmouth when the Church burned. A crane was brought in to lift the entire steeple with bell to the ground. The inscription on the bell puts its maker as the McShane Bell Foundry of Baltimore in 1887. Christ Church figured significantly during the Treaty summer and on September 5, 1905 was the site of a Service of Thanksgiving offi ciated by members of the Russian Orthodox Church in New York, including Father Alexander Hotovitsky, who was later martyred following the Russian Revolution of 1917 and canonized in the Orthodox church. In 2005, NH’s Episcopal Bishop, the Rt. Rev. Gene Robinson, presided over a re-enactment of that Service of Thanksgiving and reconsecrated the memorial tablet from the original Christ Church. 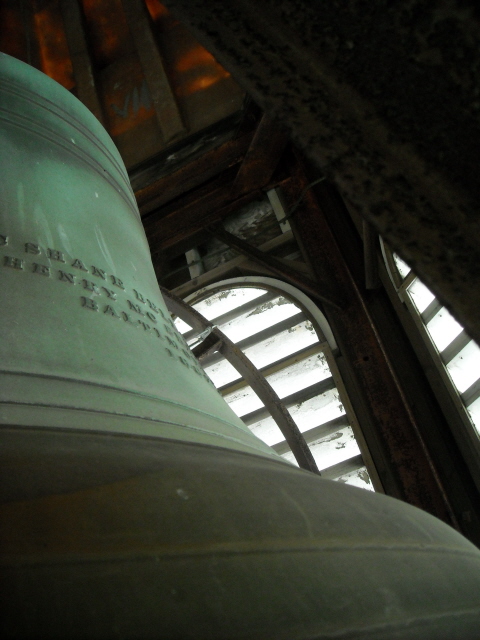