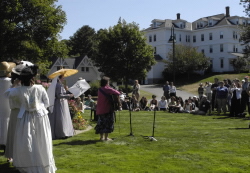 Green Acre Bahá'í School is a retreat and conference center operated by the National Spiritual Assembly of the Bahá'ís of the United States. Located in Eliot, Maine, on the banks of the Piscataqua River, the School has served as a center for the study of religion and peace since the 1890s. The founder of Green Acre, Sarah Jane Farmer, is recognized as a pioneer in the promotion of peace and, particularly, in fostering the role of women as peacemakers. 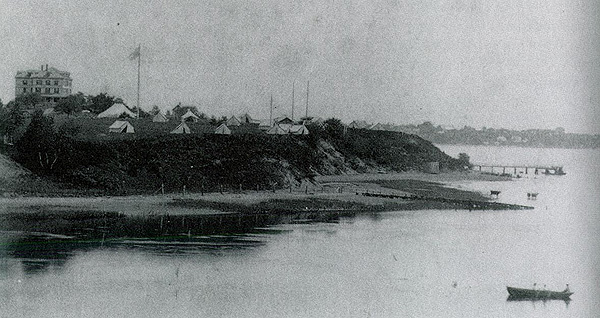 Sarah Farmer's commitment and passion for promoting peace was rooted in her adherence to the Bahá'í Faith, the youngest of the world's independent monotheistic religions. Founded in Persia (present-day Iran) in the mid-nineteenth century, the Bahá'í Faith is the world's second-most geographically widespread religion, after Christianity, with some 6 million adherents residing in more than 200 countries and territories. The Bahá'í Faith teaches that humanity is now approaching its long-awaited stage of maturity, when the oneness of humanity will be recognized and established and conflicts based on differences of race, nationality and religion will cease.

During the 1890s and early 1900s, Sarah Farmer firmly established Green Acre as a place dedicated to the study and promotion of peace and the harmony of religions. 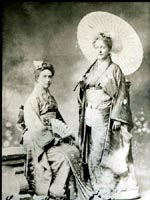 The war between Japan and Russia was of great concern to the participants at the 1904 Green Acre Conference. During the closing ceremonies, as the Russo-Japanese conflict raged, the great operatic singer Emma Thursby, in Japanese costume, sang the national anthem of Japan. The audience then rose and sang the national anthem of Russia, lead by Mrs. Mary Burnham Moore, and prayed that the peoples of these two great nations might soon clasp hands in brotherly love and peace.

In 1905, hearing that the signing of the Portsmouth Peace Treaty was to take place at the Portsmouth Shipyard, Sarah Farmer sent notes to the American, Japanese and Russian Embassies, inviting the delegates to a special celebration at Green Acre. President Roosevelt and Russian Ambassador Witte wrote to Sarah Farmer thanking her for the invitation to Green Acre but declined due to schedule conflicts. The Japanese delegation accepted the invitation and visited Green Acre on August 31, 1905. Later that day, Japanese Minister Takahira, Dr. Kahn, and Miss Farmer all addressed over 300 guests on the subject of Peace. 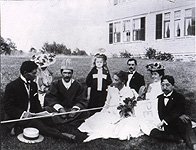 In this picture Sarah (seated, holding flag) is shown with the Japanese delegates in front of Ole Bull Cottage at Green Acre. Also pictured at Green Acre on that historic day were Dr. Ali Kuli Kahn (3rd from left), Mr. and Mrs. William Hoehn (third from right and 2nd from left) and Miss Ethel Lawrence (second from right), and Mr. K. Ochiai, Japanese envoy (far right). Photo courtesy of the Portsmouth Atheneum.

Although the only witnesses in the room with Witte and Komura were Asst. Secretary Pierce, Gov. McLane, Portsmouth Mayor Marvin, Adm. Mead commander of the Shipyard, and the commanders of the Dolphin and the Mayflower (the two Navy vessels who had conveyed the diplomats to Portsmouth), Sarah received a visitor pass to be at the Yard that day. 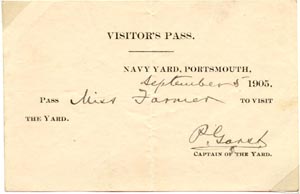 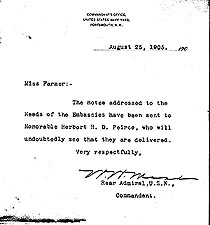 About Sarah Jane Farmer and Green Acre Bahá'í School
Green Acre was founded by Sarah Jane Farmer (1844-1916), the daughter of Eliot native Hannah Tobey Shapleigh and Moses Gerrish Farmer of Boscawen, NH, a pioneer electrical inventor. He had more than 100 patents, including the fire alarm pull box that is still in use today. Hannah's many interests and accomplishments included raising funds to help save the old North Church in Boston from demolition; sending supplies to Southern hospitals during the Civil War, and establishing Rosemary Cottage in Eliot, ME, as a summer retreat for children and mothers from the inner city.

The Farmers were Transcendentalists who were associated with the Abolitionists and other progressive movements. Their home was a way station on the Underground Railroad. Sarah Farmer grew up knowing influential writers, inventors and thinkers of her day, including John Greenleaf Whittier; Harriet Beecher Stowe; Sojourner Truth; Dr. W.F. Channing; Frank J. Sprague, a former student of her father; Lord Kelvin, the famous English scientist; Charles Proteus Steinmetz; Professor William B. Rogers; and her father's brother-in-law, writer Charles Carleton Coffin. These associations contributed to Sarah Farmer's understanding of social problems and the importance of peace, freedom and equality.

In 1890, Sarah Farmer joined four businessmen to open a hotel in Eliot. The poet John Greenleaf Whittier came that first summer and gave Green Acre its name. In 1892, Sarah Farmer had a vision that Green Acre should offer conferences on progressive subjects the sciences, arts and religionuniversal in scope and open to all races and creeds. Over time, these conferences brought together leading writers, educators, philosophers, artists and activists.

In 1894, under a tent banked by fragrant pines, Sarah Farmer dedicated Green Acre to the ideals of peace and religious unity and founded the "Green Acre Conferences." She raised the world's first known peace flag, explaining: "In looking for an emblem, we wanted something that would be a call to everybody and fit everybody-and we felt that the Message that had been brought to the world by prophet after prophet was the message of 'Peace.' So we have put on a large banner over our heads: PEACE."

The flag was 36 feet long with green letters on a white background. It hung on an 85-foot flagpole that was once a ship's mast. Each year, the flag raising was followed by a series of lectures that continued throughout the summer. The Green Acre Conferences brought together leaders of thought from around the world to speak on such subjects as international peace, religious tradition and practice, the arts, sciences, education and philosophy. By 1897, the Green Acre Conferences were known around the world. The annual raising of the Peace Flag is a tradition that continues today.

Sarah Farmer brought her discovery of this new religion back to Green Acre and supplemented the materials and lectures offered there with the teachings and principles of the Bahá'íFaith. Today, Green Acre, an historic Bahá'ícenter of learning, continues to foster such Bahá'íideals as the oneness of humankind, world peace, race unity, and the equality of women and men.

The Bahá'í Vision of World Peace

"The Great Peace towards which people of good will throughout the centuries have inclined their hearts, of which seers and poets for countless generations have expressed their vision, and for which from age to age the sacred scriptures of mankind have constantly held the promise, is now at long last within the reach of the nations. For the first time in history it is possible for everyone to view the entire planet, with all its myriad diversified peoples, in one perspective. World peace is not only possible but inevitable. It is the next stage in the evolution of this planet-in the words of one great thinker, 'the planetization of mankind'."

This vision was expressed by the governing body of the worldwide Bahá'í community, the Universal House of Justice, in its 1985 statement The Promise of World Peace. The statement summarized the Bahá'í perspective on the requirements for bringing about a just and peaceful world. It identified persistent barriers to peace-including racism, inordinate disparity between rich and poor, unbridled nationalism, religious strife, and the oppression of women-and offered prescriptions for promoting the oneness of humankind, such as universal education, adopting an international auxiliary language, and strengthening mechanisms for world governance and arbitration. The document has been delivered to heads of state and leaders of thought throughout the world and continues to be a source of reflection and action for the worldwide Bahá'ícommunity. Green Acre is one of many Bahá'í schools where the principles outlined in the document are taught and learned by thousands of people.

Negotiating the Treaty of Portsmouth won for President Roosevelt the Nobel Peace Prize, and it demonstrated that mediation and a true desire for peace can stop the guns of war. Portsmouth was a beginning, but alas not an end. War still rages in many parts of the globe, making the Bahá'ívision of world peace more relevant than ever.

As stated in The Promise of World Peace:

"...the abolition of war is not simply a matter of signing treaties and protocols; it is a complex task requiring a new level of commitment to resolving issues not customarily associated with the pursuit of peace. Based on political agreements alone, the idea of collective security is a chimera. The other point is that the primary challenge in dealing with issues of peace is to raise the context to the level of principle, as distinct from pure pragmatism. For, in essence, peace stems from an inner state supported by a spiritual or moral attitude, and it is chiefly in evoking this attitude that the possibility of enduring solutions can be found...

"Whether peace is to be reached only after unimaginable horrors precipitated by humanity's stubborn clinging to old patterns of behaviour, or is to be embraced now by an act of consultative will, is the choice before all who inhabit the earth. At this critical juncture when the intractable problems confronting nations have been fused into one common concern for the whole world, failure to stem the tide of conflict and disorder would be unconscionably irresponsible."

For more information about Green Acre Bahá'í School go to our website at: www.greenacre.org