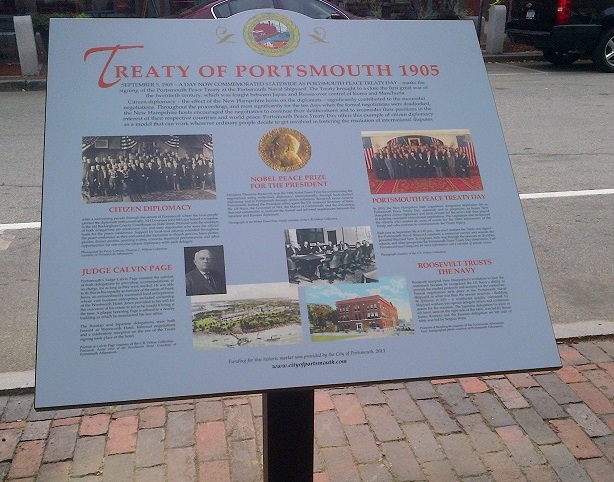 Portsmouth celebrated the day with the annual bell-ringing at 3:47 pm – the moment the Treaty was signed in 1905 – and with the unveiling of the new City of Portsmouth Historic Marker in Market Square.

The plaque, which details the Treaty history and the role of local people, is located outside Piscataqua Savings Bank on the site of Judge Calvin Page’s law office. Page made it possible for both of the delegations to stay at Wentworth By the Sea Hotel, at no cost, for the 30 day duration of their negotiations. He was a pivotal figure in encouraging the citizen diplomacy that Portsmouth Peace Treaty Day commemorates.

In addition to the unveiling, Portsouth Mayor Eric Spear read the Governor’s Proclamation and bells were rung in other locations around the state, especially where cherry trees are planted as a living memorial to the Treaty. These sites include Wentworth By the Sea, Strawbery Banke Museum, the John Paul Jones House Museum and the public schools of Portsmouth.

“The placement of the City of Portsmouth Historic Marker in the middle of downtown Portsmouth near the site of Calvin Page’s memorial emphasizes the role local citizens played, along with NH Governor John McLane, as the official hosts for the peace conference,” said Charles B. Doleac, president of the Japan-America Society of New Hampshire and founder of the Portsmouth Peace Treaty Forum that organized the 100th anniversary celebrations in 2005.

The bell-ringing commemorating the Treaty signing starts with a US Navy memorial salute at the Portsmouth Naval Shipyard followed by a long blast on the Shipyard whistle at 3:47 pm. That is the signal for the bells throughout the Seacoast to ring. The bell-ringing is organized by the Portsmouth Peace Treaty Forum with local churches and schools who participate in the bell-ringing each year. The list included:

• Portsmouth Public Schools rang bells and alerted their Sister City schools in Nichinan, Japan to do the same. 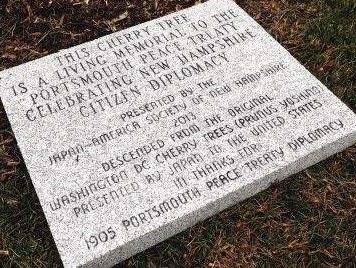 In 2013 the Japan-America Society of NH launched a project to create a living memorial to the Portsmouth Peace Treaty in the form of cherry trees descended from the iconic Washington DC cherry trees. Those trees, that are the focus of the famous annual Cherry Blossom Festival, were a gift from Japan to the United States in 1912 in thanks for the American role in orchestrating the diplomacy that led to the signing of the Portsmouth Peace Treaty, in Portsmouth in 1905. Funding for the project came from the Japan Foundation Center for Global Partnership, headquartered in New York, which awarded just under $10,000 from its Grassroots Exchange and Education program.

In May, in conjunction with the blossoming of Portsmouth’s Nichinan Sister City cherry trees, the Japan-America Society of NH hosted the first annual Cherry Tree Festival event at Wentworth By the Sea Hotel, featuring the Washington DC-based author of The Cherry Blossom Festival: Sakura Celebration, Ann McClellan, the authority on the history of the DC cherry trees. She presented an illustrated talk in the historic Grand Ballroom of the hotel, where the Japanese hosted an appreciation banquet the night before the Treaty was signed. A tea reception followed.