For a video of the complete program, click here. 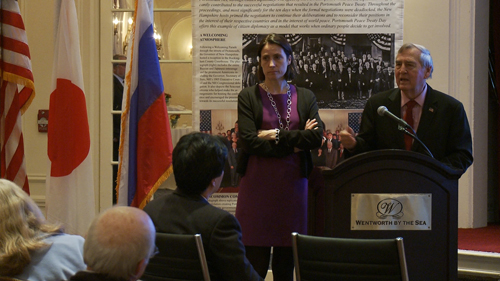 Brookings Institution’s Fiona Hill listens as Graham Allison, founder of the Kennedy School at Harvard answers a question from the audience at the Portsmouth Peace Treaty Forum at Wentworth By the Sea Hotel.

The 2016 Portsmouth Peace Treaty Forum at Wentworth By the Sea this week, "Reconsidering the Trilateral Cooperation Study: Relationships Between Japan, Russia and the US," examined where Russia-Japan, Russia-US and US-Japan relationships stand, on the eve of the Presidential election.

Graham Allison, director of the Belfer Center at the Kennedy School at Harvard and Fiona Hill, senior fellow at the Brookings Institution presented a newly-published Befler Center re-release of their 1992 Trilateral Cooperation report with a new Foreword, issued in advance of a meeting between President Putin and Prime Minister Abe scheduled for this December.  The Forum presentation echoed that Foreword, written in October 2016, concluding, “In the rapidly evolving geopolitics of Asia, both Russia and Japan now view improving their bilateral relationship as a hedge against China, putting the resolution of the territorial dispute and the conclusion of a peace treaty back at the top of their shared agenda…Mobilizing the political will to accept a compromise is another matter.”

Graham Allison, the founder of the Kennedy School of Government at Harvard, and the lead Japanese and Russian scholars on the topic, Hiroshi Kimura and Konstantin Sarkisov, first presented their report Beyond Cold War to Trilateral Cooperation in the Asia Pacific Region in 1992. The report and its exhaustive background research were coordinated by Fiona Hill, then at Harvard. The four scholars examined their research in a Portsmouth Peace Treaty Forum in September 1995, discussing the dispute between Russia and Japan over the Northern Territories/Kurile Islands that has prevented the signing of a peace treaty to end World War II between the two nations.

During the Forum, Allison and Hill reviewed the efforts by the original Trilateral Cooperation team who suggested 66 different scenarios to end the impasse over control of the disputed islands. They observed that ideas such as shared administration allow for a net-positive outcome rather than the zero-sum loss of face on either side, while both President Putin and Prime Minister Abe juggle the nationalistic forces at play in both Russia and Japan.

Both Allison and Hill, and Forum guest Consul General of Japan in Boston Rokuichiro Michii suggested that the citizen diplomacy displayed in Portsmouth in 1905 offers a model that might encourage lower “third level” meetings between military and civilian counterparts in both countries (supplementing discussions by the top leaders and the State Department and Foreign Ministry) to help reach consensus.

At the start of his remarks, Allison said, “Thanks to the people of Portsmouth who invented something special. That local people engaged with the [1905 Russian and Japanese] diplomats was odd, strange, and quite remarkable for its outpouring of support and enthusiasm … and is a topic worth thinking about.”

Hill commented, “In 1992 I didn’t think we’d be doing this again. [But] politics is always problematic. In 1905 there was a willingness to reach settlement that made a Russian-Japanese resolution feasible. Now Russia and Japan are trying to find compromise. For Japan, China is the biggest existential threat since 1945. Russia is wondering about China too.

“On a prior trip that was cancelled, Japan was preparing for Putin to visit historic sites from the Russo-Japanese War where Russian prisoners were cared for and their cemetery is still tended by local Japanese villagers. [Based on the 1905 example of Portsmouth’s citizen diplomacy], you should all be poised to help.”

Charles B. Doleac, founder and moderator of the Portsmouth Peace Treaty Forum noted in introducing the program, “In a recent article in the Atlantic Magazine, Graham Allison and Neal Ferguson proposed the formation of an institute of applied history to advise the President. Adopting the model of the Institute of Economic Advisors this group could identify historical examples and provide often overlooked context to international relationships and disputes.

“In 2015, on the 110th anniversary of the Portsmouth Peace Treaty, Russian and Japanese diplomats met for the first time since 1905 in this same room [the Wentworth Grand ballroom where the Forum took place] where they agreed, in the newspaper’s words, to ‘bury the hatchet.’ When Fiona and Graham first came to Portsmouth in 1995, it was unclear whether Wentworth By the Sea would be saved from demolition. It is fitting that they come back, to this place, with renewed ideas, including citizen diplomacy, for settling the dispute between Russia and Japan that has lasted for 47 years in the context of a peace that lasted from 1905 to 1945.”

Graham Allison is Director of the Belfer Center for Science and International Affairs and Douglas Dillon Professor of Government at Harvard's John F. Kennedy School of Government, twice recipient of the Department of Defense's highest civilian award for his work on DOD strategy and policy towards Russia, Ukraine, and the other states of the former Soviet Union and Fiona Hill, now director of the Center on the United States and Europe, a senior fellow in the Foreign Policy program at the Brookings Institution and author of the 2013 book, Mr. Putin: Operative in the Kremlin.