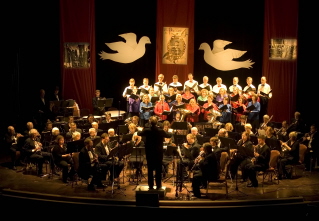 Richard Spicer, Music Director for the Seacoast Wind Ensemble and music historian has spent the past year researching music for the program. During a visit to the US Marine Corps Band library in Washington, DC he found the programs – and complete musical scores arranged for band – from the Inauguration of President Jimmy Carter, who won the 2002 Nobel Peace Prize for bringing peace between two warring countries, as President Theodore Roosevelt won the 1906 Nobel Peace Prize for the Portsmouth Peace Treaty.

Mr. Spicer also found the program from the White House State Dinner on March 25, 1979, that celebrated those Camp David Accords, including a performance by the U.S. Army Chorus of an arrangement of traditional Egyptian and Israeli folk songs. That gave him the inspiration to invite local chorus Portsmouth Pro Musica under the direction of Priscilla French as guest artists for the June 20th concert to perform the piece. Then the challenge was to find the music needed to perform. “I began looking for the music that was arranged for the original concert, which led me to the original Army Band arranger, James Kessler, who is now retired,” said Spicer. “To my delight and gratitude he agreed to provide the arrangement for chorus and the Ensemble. So we will be performing music specially arranged for the Portsmouth Peace Treaty concert, created by the same man who arranged the Camp David Accords concert.

Other selections on the program honor Senator George Mitchell, now special envoy to the Middle East, who helped negotiate the Northern Ireland peace accords and Senator Claiborne Pell of Rhode Island (who died on January 1, 2009), founder of the Pell Center for International Relations and Public Policy.

The Executive Directors of the Pell Center in Newport RI, dedicated to “enhancing international dialogue to achieve a more peaceful world and preparing individuals for an informed and active role in local, national, and world affairs” and the Mitchell Institute in Portland ME, committed to “strengthening the involvement of a new generation of civic-minded and committed citizens…while creating educational opportunity for Maine's young people” both expressed deep appreciation on behalf of the Senators for being honored in the program. A performance of Sibelius’ “Finlandia” commemorated the 2008 Nobel Peace Prize winner, Martti Ahtisarri, former President of Finland.

For an interview with Mr. Spicer by Matt Kanner, editor of The Wire, click here. 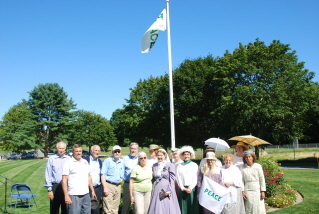 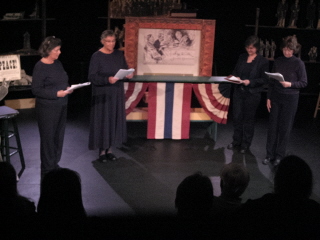 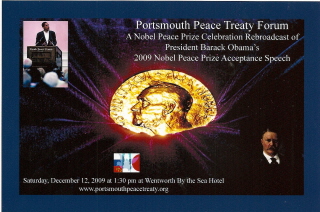