Several social events were hosted in York during the Treaty summer of 1905. A reception was held for the Russian and Japanese delegations at the York Country Club and Russian diplomat Sergius Witte often visited Short Sands Beach in York where he enjoyed chatting with summer residents. 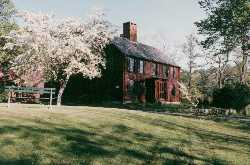 The most elaborate social affair took place in the gardens of the Elizabeth Perkins House (left), now owned by the Old York Historical Society. The Perkins Japanese garden party was held as a benefit for York Hospital and Historical Society and the event received donations from both delegations.

For the Treaty 100th anniversary in 2005, the Old York Historical Society reinterpreted the grounds of the Elizabeth Perkins House to show the gardens as they were decorated for the 1905 lawn party. An exhibit was also presented in the house and two Kids Peace Days were held.

At 4 o’clock on Thursday August 24, 1905 Witte and the Russian delegates and Komura and the Japanese delegation journeyed by auto from the Wentworth to the York home of Mrs. Newton Perkins at Sewall's Bridge to attend a benefit Japanese fete. Now part of the Museums of Old York, this historic Perkins house is preserved much as it looked at the time of this “crowning event of the memorable season of 1905.”

“The spacious and beautiful grounds” were said to be “especially well adapted for an affair of this kind” but “taxed to their utmost to accommodate the immense crowd representing the wealth and distinction of York Harbor’s summer colony,” plus visitors from Portsmouth Kittery and New Castle. While the roads were clogged with carriages and automobiles, others arrived on extra cars added by the Portsmouth Dover and York street railway.  Many of the women wore elaborate costumes, while their hostess wore a gown of white lace and her daughter Elizabeth Perkins wore “a white gown of Mexican drawn work.”

One of the original Japanese lanterns from the 1905 garden party. 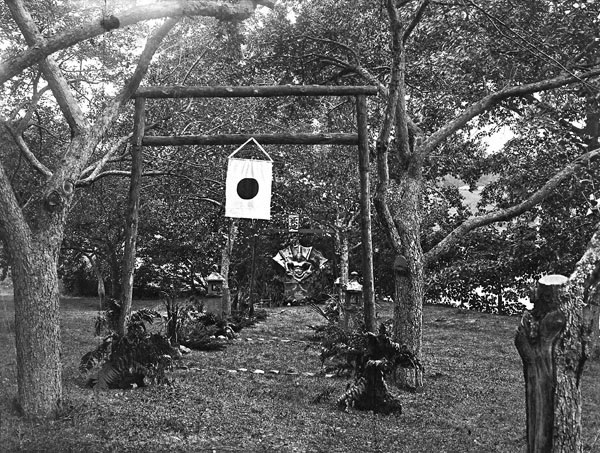 The Perkins garden was decorated with American and Japanese flags, a dragon and small parasols, and a temple complete with a statue of Buddha (right).  The paths were lined with Japanese style paper lanterns. The more than 700 guests were treated to a “jiu jitsu” demonstration by Prof. Yamashita, his wife, and “a corps of experts.” Their performance took place on a large stage built in center of the lawn and a natural amphitheatre holding 200 seats. Boxes here were sold to some of the wealthiest summer residents for charity, while the center box – draped with Japanese flags -- was reserved for Japanese envoys Komura, Takashira, and three male secretaries. Herbert H. D. Peirce, representing the U.S. State Department, occupied the box next to them.

After this hour and twenty minute performance, tea was served in the garden by young ladies “dressed in Geisha costumes.” The tea was “Brewed in true Oriental fashion and served in dainty cups.”  Their costumes “many of them having designs painted on silk or embroidered with the dragons, flowers and other strange emblems of the East” were said to be most “elaborate and costly.” “Smaller girls of sixteen dressed in the Russian peasant garb of gay colors. . . dispensed lemonade” and other cooling drinks.

The Japanese envoys and jujitsu performers were gathered under the shade of “an immense Japanese parasol” and all the attendees given a chance to meet each of their “distinguished visitors.”  Perhaps it is no wonder Komura later donated $1,000 to the Old York Historical Society and the York Hospital, while Witte donated only $100.