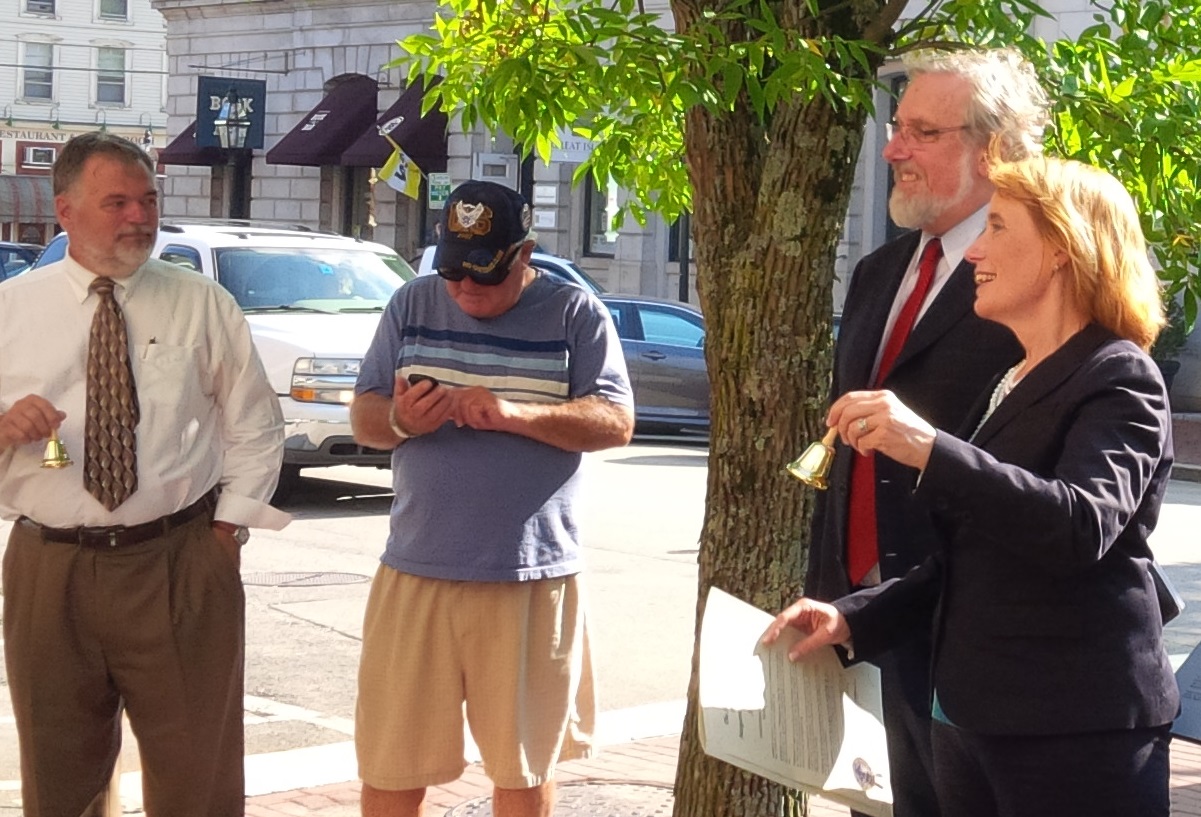 Portsmouth celebrates Portsmouth Peace Treaty Day on September 5, 2014 with the annual bell-ringing at 3:47 pm– the moment the Treaty was signed in 1905 – and with Governor Maggie Hassan reading the Governor’s Proclamation. Portsmouth Mayor Robert Lister, Japanese Consul-General Tsutomu Himeno and Portsmouth Peace Treaty Forum chairman Charles B. Doleac are also attending. The ceremony takes place at the City of Portsmouth Historic Marker on Pleasant Street opposite North Church in the middle of downtown Portsmouth.

The Historic Marker installed last year on Portsmouth Peace Treaty Day and the Judge Calvin Page Portsmouth Peace Treaty memorial on the wall nearby emphasize the role local citizens played, along with NH Governor John McLane, as the official hosts for the peace conference. Bells ring in other locations around the state, especially where cherry trees are planted as a living memorial to the Treaty. These sites include Wentworth By the Sea, Strawbery Banke Museum, the John Paul Jones House Museum and the public schools of Portsmouth.

“Next year is the 110th anniversary of the Portsmouth Peace Treaty,” noted Forum chairman Charles B. Doleac “Since the 100th anniversary in 2005, the story of the Treaty, the role of citizen diplomacy and the idea that ordinary people can make a difference have spread. Just two years ago we learned that the famous Washington DC cherry trees – one of the most recognized gifts of friendship one nation ever gave to another – was a ‘thank you’ gift from Japan to the US for our assistance during the Russo-Japanese War. Theodore Roosevelt’s orchestration of the peace conference here in Portsmouth was a major part of that assistance. By planting cherry trees descended from those DC trees around New Hampshire and by ringing bells on the anniversary of the Treaty signing, we are creating a Portsmouth Peace Treaty Living Memorial.”

The September 5, 2014 bell-ringing commemorating the Treaty signing starts with a US Navy memorial salute at the Portsmouth Naval Shipyard followed by a long blast on the Shipyard whistle at 3:47 pm. That is the signal for the bells throughout the Seacoast to ring. The bell-ringing is organized by the Portsmouth Peace Treaty Forum with local churches and schools who participate in the bell-ringing each year. The list includes:

In addition to these commemorations, the Portsmouth Peace Treaty is commemorated by: