Wentworth By the Sea Hotel – The hotel donated the accommodations to the full Japanese and Russian delegations for the 30 days on the Conference. The Ambassador’s Parlor (below) was where Witte received many public visitors, most notably Jacob Schiff and a delegation from Lowell Massachusetts, both petitioning for an end to the pogroms taking place in Russia. 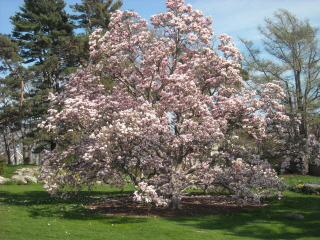 Both Witte and Komura conducted informal negotiation sessions at the hotel and, famously, walked in the Rose Garden to assess each other’s approach to the peace conference. A magnolia tree now flourishes in the Wentworth garden and is reputed to have been a gift from the government of Japan.

Since 1994, the Portsmouth Peace Treaty Forum has organized bellringing and encouraged diplomats, politicians, scholars and citizens to explore diplomatic themes “in the spirit of the Portsmouth Peace Treaty.” Participants in the Forum repeatedly note the indispensable role of citizens and the community in the Portsmouth peace that was brokered by Roosevelt. In 2006 the Forum moved its venue from Portsmouth City Council Chambers to Wentworth By the Sea for the 100th anniversary of TR’s Nobel. Now presented in the Wentworth Grand Ballroom, the room in which the Japanese delegation hosted a reception on August 29, 1905 when peace was achieved for the Russian delegation and their New Hampshire hosts, the Forum each year welcomes a diplomat or scholar to explore the historic theme through the lens of his or her recently published book. In 2006, the Forum welcomed Cathal Nolan, president of the Theodore Roosevelt Association and author of Ethics and Statecraft. In 2007, the Forum’s guest was Ambassador Dennis Ross, author of Statecraft: And How to Restore America’s Standing in the World. In 2008, the Forum guest was Samantha Power, Pulitzer Prize winner and author of Chasing the Flame: Sergio Vieira de Mello and the Fight to Save the World. In 2009, the Forum presented a rebroadcast of the Nobel Peace Prize lecture by US President Barack Obama. 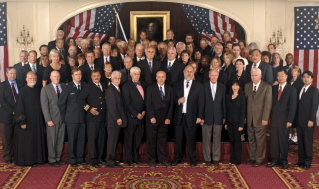 In 2010, the room was the location chosen (left) to recreate the 1905 welcome reception photograph as a symbol of the citizen diplomacy recognized in the creation of Portsmouth Peace Treaty Day. And in 2011, the Japanese Foreign Ministry presented the Order of the Rising Sun, Gold Rays with Rosette to Charles B. Doleac, Esq. in the Wentworth Grand. The award announcement noted, “When plans were announced to demolish the hotel where the delegates from both Japan and Russia stayed during the peace negotiations (Wentworth By the Sea), Mr. Doleac made great efforts to preserve this historic building. He insisted that the hotel is historically valuable and that passing it down to future generations would further strengthen the Japan-US friendship.”

The Portsmouth Herald reported an account of that hospitalitry on August 16, 1905:

Mrs. Peirce, the wife of Assistant Secretary of State Peirce who made the arrangements for the conference is a most accomplished woman and has inaugurated a brilliant social season here. Tonight she was to have given a lawn party to the distinguished guests at the Wentworth but it was postponed on account of the weather. Tomorrow evening she will entertain the Russian suite at dinner and this will be followed later by a dinner to the Japanese suite. Mrs. Peirce who attended the public schools of Portsmouth when a girl, lived for some years in Russia and speaks the language of that country most fl uently and in consequence she will make a delightful hostess to the czar’s emissaries tomorrow evening and much of the conversation about table will be carried on in Russian.”