The year-long celebration of the 100th anniversary of President Theodore Roosevelt's Nobel Peace Prize for helping to end the Russo-Japanese War of 1904-05 became an opportunity to recognize a TR little remembered - the President who wielded not "a big stick” but instead used the good diplomatic offices of a powerful nation in the interest of peace.

TR was a consummate diplomat. In 1905 he worked for three months to convince the Russians and Japanese to come to the negotiating table to end the Russo-Japanese War which had been raging since January 1904. Now called "World War Zero," it was the first modern and brutally mechanized war and threatened to bring the nations of Europe in on either side. Roosevelt finally convinced both sides to negotiate by July 1905 and for 30 days that summer the two sides met in Portsmouth. Thanks in part to TR's back-channel diplomacy with emissaries in Tokyo and St. Petersburg (plus good informants on the ground in Portsmouth -- TR was intentionally not at the table), the Portsmouth Peace Treaty was signed on September 5, 1905. TR earned the Nobel Peace Prize the next year for his efforts, becoming the first American to win a Nobel of any kind, as well as the first American President of just three to date to win the Peace Prize. 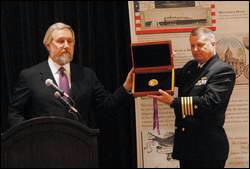 At the commemoration event on December 10, 2006 - one hundred years to the day on which the Norwegian Nobel Institute presented the 1906 Nobel Peace Prize to President Roosevelt -- a group of citizens in Portsmouth, New Hampshire presented an official replica of the Nobel Peace Prize to the commander of the Portsmouth Naval Shipyard (right in photo), that hosted the formal negotiations between Russia and Japan and 1905 and today operates a Treaty Rooms Museum in the building where the negotiations took place. In presenting the replica medal, Charles B. Doleac (left in photo), moderator of Portsmouth Peace Treaty Forum and founder of the Japan-American Society of New Hampshire which hosted the commemoration, read a letter from Geir Lundestad, Director of the Norwegian Nobel Institute. The letter said, in part, "We are honored that you are celebrating the 1906 Nobel Peace Prize Laureate Theodore Roosevelt. The basis for the committee's decision was stated in the presentation address as 'President Roosevelt"s happy intervention to terminate the bloody war recently waged between two Great Powers, Japan and Russia.’ Roosevelt took strong interest in the peaceful solution of disputes along several different lines. When I visited the White House a few years ago, I was pleased to see Roosevelt’s peace prize medal prominently displayed in the Roosevelt Room right across the hall from the Oval Office.”