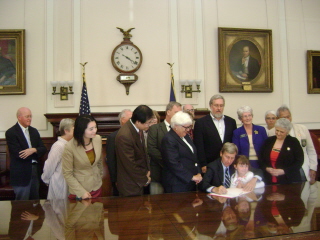 The New Hampshire House and the New Hampshire Senate voted unanimously to pass SB379, “An Act proclaiming September 5 as Portsmouth Peace Treaty Day” and Governor John Lynch signed the bill on August 17, 2010 (above).

The bill amended RSA4:13 “the Powers of Governor and Council: Observances Proclaimed by Governor” by adding the following new paragraph:

The intent of Portsmouth Peace Treaty Day is to commemorate New Hampshire’s role as the host President Theodore Roosevelt designated for the peace conference that ended the Russo-Japanese War, and to recognize the part played by New Hampshire citizens in the multi-track diplomacy of the successful international negotiations between the Japanese and Russian diplomats in Portsmouth that resulted in the Portsmouth Peace Treaty on September 5, 1905.

2.                   Roosevelt’s Choice of New Hampshire: In 1905 President Theodore Roosevelt convinced the Russians and Japanese to enter into direct negotiations to end the war, meeting in the United States; and chose Portsmouth, New Hampshire as the negotiating site, with its secure U.S. Naval Shipyard, eager state and local government officials and welcoming community. Roosevelt never came to Portsmouth, but used back-channel diplomacy with Japan, Russia and European powers to influence the negotiations while relying upon the US Assistant Secretary of State, the US Navy and the government and citizens of New Hampshire to facilitate the formal and informal negotiations between the Japanese and Russian diplomats in and around Portsmouth that lasted nearly 30 days.

3.                   New Hampshire’s Citizen Diplomacy: Citizen diplomacy – the effect of the New Hampshire hosts on the diplomats -- significantly contributed to the successful negotiations that resulted in the Portsmouth Peace Treaty that earned President Roosevelt the 1906 Nobel Peace Prize. This unique example of multi-track citizen diplomacy shows that ordinary people can make a difference in international affairs.

Many elected and community officials spoke in favor of the bill at the Senate and House committee hearings, including the bill sponsors Senator Clark and Representative Read, Senator Barnes and Representative Cali-Pitts, the Secretary of State, Portsmouth Mayor Tom Ferrini, Charles Doleac (president), Judge Sawako Gardner and Stephanie Seacord of the Japan-America Society of NH, Steve Upton of the Russia Society of NH Board and Don Alusic, an independent producer of a documentary about the Portsmouth Peace Treaty.

“We greatly appreciate the support of all of the sponsors of the bill to make September 5, Portsmouth Peace Treaty Day and to cement its importance in the historical annals of the state of New Hampshire,” said Mr. Doleac in announcing the passage of the bill. “Secretary of State Bill Gardner helped us enormously as the bill made its way through the legislative process by personally advocating for it to the Committees. Mayor Ferrini prepared a letter that was presented to the House Committee by Assistant Mayor Nancy Clayburgh. Thanks to all of their efforts, the bill passed both House and Senate, unanimously.”


Each year on September 5th at 3:47 pm – the exact moment the Treaty was signed -- Portsmouth commemorates its history by recreating what happened in 1905. The Shipyard conducts a memorial service that includes the firing of their guns which is a signal to blow the Shipyard whistle. In response, the bells of Portsmouth ring for ten minutes. In 1905 they rang for an hour in celebration. People in Market Square can hear church bells all over the city and other seacoast churches and the Portsmouth Public Schools participate in the bell-ringing as well. Each year, starting in 2010, the Governor of New Hampshire signs a proclamation commemorating the day throughout the State.

In 2010, members of the Portsmouth Peace Treaty Anniversary Committee recreated the 'community portrait' taken in 1905 during the Welcoming Reception for the Russian and Japanese delegates to the peace conference.