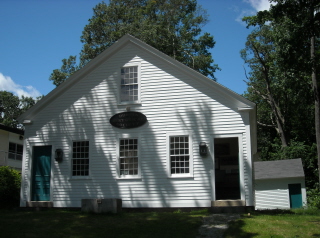 On August 22, 2008, Charles Doleac presented his NH Humanities Council-sponsored lecture, "Teddy Roosevelt's Nobel Peace Prize & New Hampshire" in Dublin, New Hampshire at the annual meeting of the Dublin Historical Society. Guests of Ambassador & Mrs. Joseph Petrone at their home, "Knollwood" (home of Treasury Secretary Frank MacVeigh during the Taft administration), the Society met in the ballroom where, while visiting, Taft once greeted every resident in the town -- all 500 townspeople.

Introducing the talk, Society President Russell Bastedo emphasized the value of "strengthening the scholarship behind the Society's collections" by mentioning the 1905 visit to Dublin by a participant in the Peace Treaty negotiations -- Baron Kaneko This is the story.

Dublin, New Hampshire was a popular summer destination for Boston and New York society. The Dublin Art Colony grew around the gatherings of their patrons - these summer people and their friends. Among them was Joseph Lindon Smith and his wife, Corinna, daughter of the New York publisher George Putnam, founder of G.P. Putnam & Sons.

In January 1901 before the Smiths left for a lengthy visit to Japan, Theodore Roosevelt, a family friend, had introduced them to Baron Kitaro Kaneko, Japanese Ambassador to the US, at an informal dinner at The White House. In her memoir Interesting People, Corinna Smith said Roosevelt “had spoken of Baron Kaneko as a good friend” and continued, “[Kaneko] generously gave us an introduction to Japan’s leading statesmen at the time and during our stay in Japan we came to know him well.” 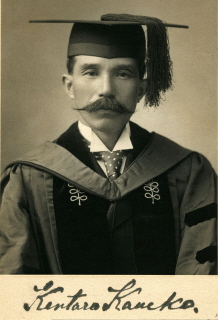 A rare image of Kitaro Kaneko from his Harvard graduation. (CB Doleac Collection)

After the Smiths returned from Japan, the Baron sent gifts in the form of a stone Buddha, Kwannon and pagoda which they subsequently installed in the Japanese moon garden they created at their Dublin summer home, “Loon Point.” He later added two dwarf Japanese maples to the garden, “which he planted himself with grave ceremony … dismissing the insistence of a local horticulturist that [they] would not live in New Hampshire.” The maples were still thriving in 1962 when Smith wrote her book.

In the summer of 1905, Baron Kaneko acted as diplomatic emissary between Roosevelt at Oyster Bay and the Japanese negotiators in Portsmouth. After the successful conclusion of the Portsmouth Peace Treaty conference he visited the Smiths in Dublin “for recuperation and meditation.” While there, he participated in the Loon Point tradition of recording visitors. As Mrs. Smith noted, “Signatures of the Smith house guests were carved on the front and sides of a tall, old-fashioned American settee which stood on the porch leading into the garden… This novel guest book attracted the instant attention of anyone who happened to be on Loon Point for the first time.” Now on display at the Dublin Historical Society Museum on Main Street, the settee (below) includes the Baron’s signature in Japanese calligraphy, a few-strokes rendering of Mt. Fuji and the word “ROKKAKU” 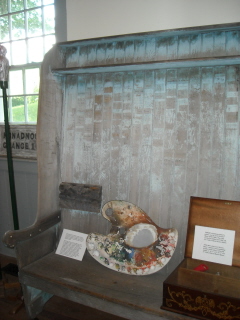 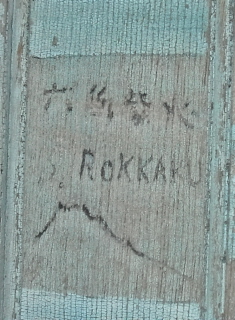