Theodore Roosevelt sought the simple, country charms of a place fanned by the fresh winds of a sea breeze as the place where the Russian and Japanese diplomats might find reason as the refuge from the battlefields of the Russo-Japanese War. A place like his summer White House at Sagamore Hill. A place called Portsmouth, New Hampshire, population 10,636. And in it, the Wentworth Hotel.

This grande dame “by the sea” was everything Versailles and the hotels of Paris had not been. Open, welcoming and candid. The newsreel shows men and women excitedly crowding the verandah of the Wentworth (even squeezing those on the edges, off) as first Witte, then Komura climb into their cars for the morning round of formal negotiations at the Portsmouth Naval Shipyard, the formal State Department host for protocol and security. 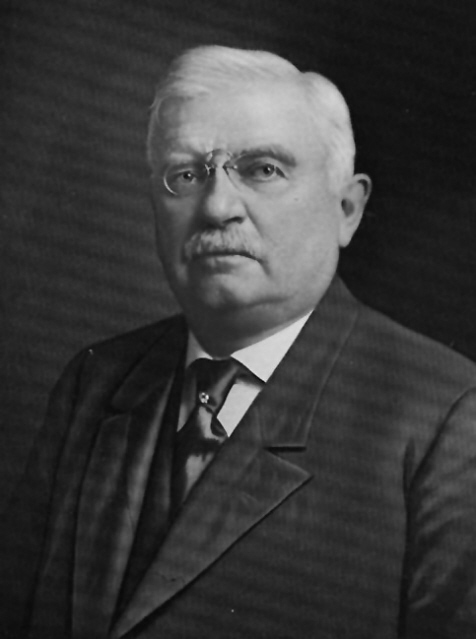 Assistant Secretary Herbert Peirce had arranged for those late model Pope Toledo cars, as he had for the accommodations in the hotel. But word on the street was that the last wishes of Frank Jones, the recently deceased beer baron who had owned Wentworth, were being honored by his executor, Portsmouth’s Judge Calvin Page (right), who made suites of rooms at the hotel available to both parties, at no charge. The local Portsmouth Herald reported the advance preparations on July 18th. When Peirce and Page called on the hotel management to ask about accommodating the diplomats, General Manager C.A. Wood replied with all the right professional courtesies, pledging everything within his power to ensure the dignitaries’ comfort to the highest standard of luxury that Wentworth could provide.

The local paper reported, “For each individual envoy the accommodations will include parlor and bath conveniences. The servants of the two legations will be cared for in separate apartments. On their arrival, Acting Secretary of State Peirce, as the representative of President Roosevelt, will tender a dinner on different occasions to each of the embassies. The arrangements for these banquets have also been completed, and they will be the best ever served in the old Granite State...C.A. Wood of the firm of Harvey and Wood, managers of the Wentworth House, mapped out and arranged the plan of entertainment. Acting Secretary Peirce was delighted with the plan as laid out and praised the Wentworth House in unequivocal terms.”

The story of a mad scramble by the hotel staff to find a Japanese flag for the top of the tower to match the Russian flag already there suggests the hotel’s attempts at attention to detail and the ingenuous sincerity that ruled the entire stay.

The hotel guests were also respectful. The usual complement of a full summer house had somehow managed to expand to include the visitors In the diningroom or in the Palm Court, hotel guests rose in respect, when the diplomats entered the room. When asked, they recalled a gregarious Witte and impassive Komura, once their curiosity won over the rustling silks and stiff-collars of the Eastern establishment in the room. Wentworth was the stage set for an extraordinary 30 days in the life of Portsmouth, New Hampshire.

Recent research, day by day and hour by hour, puts a lively drama to life on that stage. The pivotal events – finding a place suitable for lodging America’s first international peace conference’s diplomatic guests, manning a 24/7 telegraph service that linked Oyster Bay, St. Petersburg and Tokyo, and producing a formal banquet hosted by the Japanese on the night the peace was finally achieved – are just the surface features of the extent to which Wentworth’s hospitality added to the atmosphere of peace that pervaded Portsmouth long enough for the diplomats to achieve their task.

The back story of Wentworth and the Treaty of Portsmouth is about “spies” and supplicants, “summer girls” and swarms of newspapermen who recorded the details for readers, then and now. And while Wentworth has long been careful to explain that the Portsmouth Peace Treaty was signed on September 5th at the Shipyard. New diary readings have found that the pen strokes of the Armistice that ended the actual fighting were made in the “Ambassador’s Suite” at the hotel but the agreement ratified by both governments, ending the state of war that had existed between Russia and Japan, was signed at 3:47 pm at the Shipyard, and is now celebrated each year on Portsmouth Peace Treaty Day.

The Ambassador's Suite at Wentworth.

Next:  Wentworth adjusts to the spotlight.