One of the social highlights of the Treaty summer landscape was Sparhawk Hall on Kittery Point, Maine. Hon. Horace Mitchell (1857 – 1922) of Kittery was a local businessman, widely known as a summer-hotel man, a promoter of corporations, a representative in the legislature and state senator, active in many fraternal circles. Mr. Mitchell was postmaster at Kittery Point during the Harrison administration and for a number of years thereafter. He started in business as a clerk in the Marshall House at York Harbor, and he was later employed in the Hotel Wentworth at New Castle, NH. For five summers he ran the Hotel Pocahontas at Gerrish Island, and in 1890 he erected the Hotel Champernowne across from his Kittery Point home, Sparhawk Hall. The Kittery Navy Yard was one of his great interests, and he was a consistent friend to the entire naval establishment. His last great service to the town were his efforts in the state legislature and in lobbying Congress after WWI to build the Memorial Bridge over the Piscataqua River between Kittery and Portsmouth. 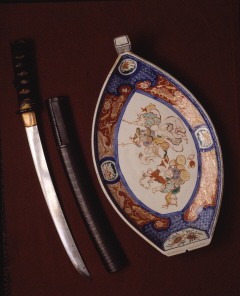 Mr. William Dean Howells, whose summer home was close by, was frequently a guest of the Mitchell home, Sparhawk Hall.  A guest register shows that Theodore Roosevelt [Jr] stayed at Mitchell’s Champernowne Hotel in 1904 and the next year Mitchell entertained Japanese delegates to the Peace Conference. The 1840-50 boat-shaped Imari porcelain bowl (right) with seven gods of good fortune painted on it was presented to him after a dinner at Sparhawk Hall. The house was later the headquarters of President Taft and other Republican leaders who came to Kittery in October 1912 when Taft wrote his name on the wallpaper at the head of the staircase.

Sparhawk Hall : A landmark of colonial architecture Sparhawk Hall at Kittery Point, Maine, was built about 1742 and restored in the colonial revival 1867-1888. In 1905 it was the home of Republican politician and hotel man, Horace Mitchell