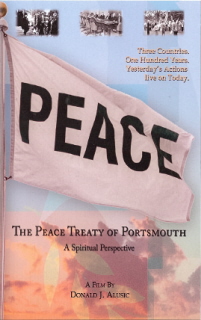 (July 6, 2010) -- Don Alusic believes that the faith and prayers contributed to the success of the negotiations that produced the 1905 Portsmouth Peace Treaty between and .

, filmmaker Don Alusic has spent the last five years researching and creating a documentary on the role spirituality and religion played in the success of the negotiations that produced the 1905 Portsmouth Peace Treaty between and . That historic event  won President Theodore Roosevelt a Nobel Peace Prize. Following the premiere screening, the film maker will discuss his project with the audience.

“The Peace Treaty of : A Spiritual Perspective” premieres July 19, 2010, at 7:30 pm, in Reimer Hall at Green Acre Baha’i School in . The event is free and open to the public. The filmmaker will discuss his project following the screening. The film premiere follows a separate weekend program at Green Acre, “Translating the Word into Action and Prerequisites for the Peace and Tranquility of the World.”

Alusic, who turned to photography, writing and filmmaking after a long career in computer marketing and program management, began thinking about the influence of faith in settling conflict when he visited the countries known today as the and just before the 1989 non-violent overthrow of that nation’s Communist government. He witnessed what he describes as “a growing interest in religion that led to the rebuilding of many churches and the enthusiastic attendance of mid-week church services.”

Many years later, studying the Portsmouth Peace Treaty, Alusic came across the concept of multi-track diplomacy, which maintains that many official and unofficial groups and individuals, including religious and spiritual leaders, individuals and groups, are necessary to produce positive results. After completing the 58-minute documentary, Alusic concluded that “spirituality also is an essential element in resolving conflict and attaining peace in our world today.”

During his research Alusic discovered the lead Russian negotiator kept a journal of his spiritual reflections. The delegates and proceedings were supported by Sarah Farmer of the Green Acre Baha’i School in , and were the focus of the prayers of Christian Science Discoverer Mary Baker Eddy and the church she founded. churches collectively rang their bells when the treaty was signed and organized a special thanksgiving service immediately after the signing.

For background on the development of the documentary or to order a copy, see http://www.peaceofportsmouthspiritual.com